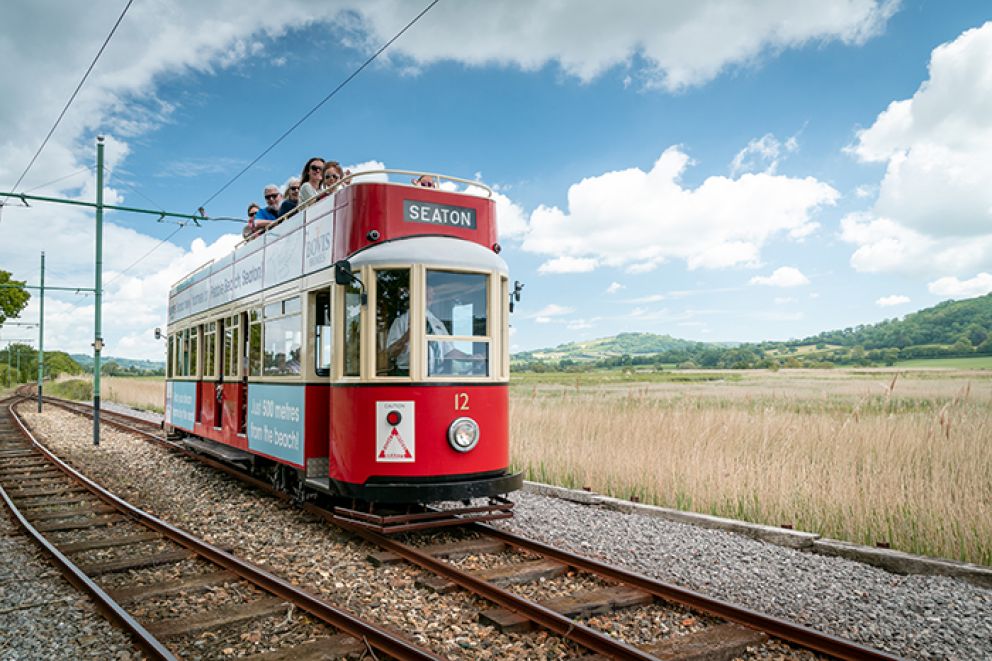 Seaton Wetlands Halt and Riverside Halt will be officially open for passengers from 1ST August. The new halts will bring the total number of stops from three to five along the three-mile line.

The project creating these new stops started as early as 2019, with Riverside halt starting construction before the pandemic, and finishing the day before the first lockdown in March 2020. Seaton Tramway’s Riverside Depot will now be accessible via a new 400sqm deck constructed above the tidal River Axe Estuary. This will allow not only a view inside the Tramway’s Depot, and a chance to see shunting of trams and engineering but is a fantastic vantage point to view the wildlife of the estuary.

Since construction finished new interpretation has been installed, including an interactive exhibit which explains how electricity is delivered to the line and the trams. The halt is also fitted with picnic tables for visitors to enjoy their lunch or a takeaway from the Tramstop Café in Colyton. You will also be able to look around the estuary with a new telescope which is fitted on the deck.

Seaton Wetlands Halt will also be opening, allowing visitors to Seaton Tramway access to the nature reserves, its 4km of trails and the wildlife that inhabits them. The Wetlands Halt is situated on what has been known as ‘Swan’s Nest Loop’, its name coming from the many swans which nest every spring around this area. These swans would add to a list of situations that delayed the construction of the halt, originally scheduled to open in Spring 2020, for the Tramway’s 50th year of operation at Seaton. For numerous reasons, starting with the lockdowns caused by the pandemic, swans nesting on the access path and wet weather, it has meant that the project has been delayed until now.

The new halt at the Wetlands, also sponsored by a generous donation from the Fine Family Foundation, links a new 250m board walk taking you from the trams, onto the Wetlands and across to the Wetlands Discovery Hut and toilets which are operated by the Wild East Devon Team at EDDC. Trams will arrive at the stop every 20 minutes from 10:12am to 5:14pm.

Jenny Nunn, Chief Executive of Seaton Tramway said “After many years in the planning, together with our partners at EDDC’s Countryside team, we have finally managed to complete the last piece of the jigsaw, by creating a circular link via the Tramway to Seaton and the amazing Seaton Wetlands for all to enjoy. This is a unique project which also opens up an area by the River Axe for the first time offering an innovative insight into the history of, not only the former railway branch line, but also the general history, tourism and wildlife of the area.”

The new halts have been constructed in conjunction with the Tramway’s ‘Travel’s Through the Axe Valley & Heritage’ Project which is part funded by the National Lottery Heritage Fund and the Tramway. As part of the project, new interpretation was developed and designed to be introduced along the entire tramway route and stations. At Seaton Station a new giant LED screen has been installed which will play a short video before each departure, showing guests the history of the branch line and where it operates in East Devon and on the Jurassic Coast.

At Colyton Station, the old ‘Milk Churn’ has been converted into a small interpretation room which includes a history of Gilbert Cowd, the former Station Master of Colyton Station, as well as a video explaining the development of the branch line and Colyton’s history.
Along Colyton’s platform postcards now sit, which tell the real-life stories originally sent from Seaton, and which can be enjoyed whilst watching the trams arrive and depart.

Seaton Tramway is also introducing ‘Gilbert’s Trail’, an interactive booklet which will be great for families to enjoy together as they explore the Tramway. Filled with facts about the heritage attraction children are also tasked to collect all the stamps which are positioned along the five stops.

Seaton Tramway has recently brought home a handful of awards this season, including Accessibility & Inclusivity Award & Large Attraction of the Year Award at the Visit Devon Awards, as well as the Outstanding Visitor Attraction from the Heritage Railway Association Awards.

Each new halt is completely step free and the Tramway operates low floor accessible trams every day at least once an hour. More details can be found at www.tram.co.uk/accessibility.

The new halts are best enjoyed with the Explorer Ticket, which allows all day travel on as many trams and to as many stops as you like during your day. Tickets can be booked online before your visit, or by visiting Seaton or Colyton Stations when you arrive. You can also scan one of the QR codes at any of the halts to buy your tickets via your phone. Just show your driver your e-ticket when your tram arrives. Seaton Tramway encourages you to Gift Aid your ticket. As a registered charity, Gift Aid helps your money go further as it allows the Tramway to claim an extra 25p for each £1 of your ticket price. 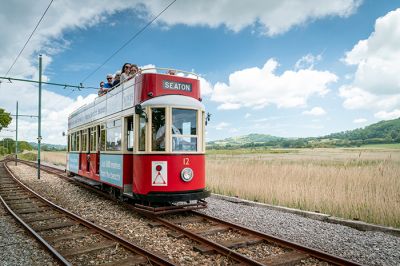 The Natural Seaton Festival is coming this July!