Its owner, Claude Lane, had a passion for trams and the factory helped realise his long held ambition of constructing a 15 inch gauge tram based on ex-Darwen car 23, then running on the Llandudno & Colwyn Bay system. 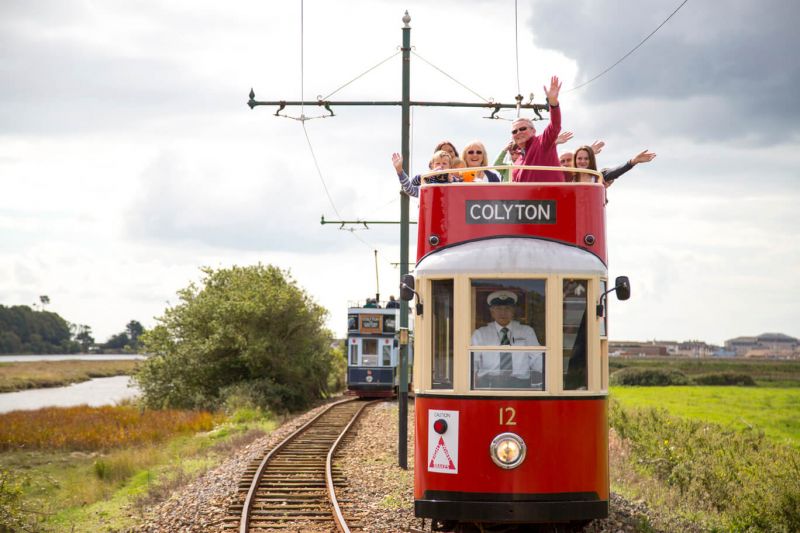 Completing the tram in 1949, he recouped some of the costs by running it at fetes and similar local events. Its popularity took Claude Lane completely by surprise, and led to a one-off summer season at St. Leonards, Sussex, in 1951 and then the first of five seasons at Rhyl from 1952. These ventures persuaded Lane to negotiate the lease on a permanent site at Eastbourne in 1953, and Modern Electric Tramways Ltd was born.

The Eastbourne Electric Tramway ran for 2/3 mile between Princes Park and the Crumbles and to service it, Lane's Barnet works turned out a larger open-top tram to spearhead the new 2ft-gauge operation. Car 6 was ready for the 1956 season and over forty years later it is now the senior member of the Seaton fleet. It was an instant success, allowing for the comfortable transport of adults for the first time!

When Eastbourne proved itself, Claude Lane closed down the Rhyl operation in 1957 in order to concentrate his fleet in one place, which was added to again in 1958 with car 7 which, like car 6, was based on the open-topper design of Llandudno & Colwyn Bay. These two became the mainstays as the smaller cars became unable to cope with large numbers.

In 1961, car 4 was built as a tribute to the Blackpool "open boat" design. 1964 saw the company completed another of its enduringly popular open toppers, car 2, this time based on a London Metropolitan Tramway's design. By now the smaller cars had been sold off, three to Don Sorenson of Wilton, Connecticut, USA. Original car 23 stayed in this country and has since been purchased and restored by an enthusiast on Merseyside. The remaining survivor, "boat" car 226, was converted into mobile shop 01 in 1965 and remained in regular use until 1995.

By the mid 1960s the growth of the town's road system began to threaten the tramway's tenure and Claude Lane began to moving to a freehold site where the tramway could flourish unfettered. As this move drew closer, Claude Lane decided on further additions to the fleet. Car 12, a streamlined single deck saloon whose looks contrasted sharply with the other cars, appeared in 1966. Car 8 was constructed during the winter of 1967/68 and debuted at the end of the 1969 season. It was of larger proportions than cars 6 & 7 in readiness for a wider gauge of 2ft 9 inches.

Along the south coast, British Railways were about to close the Seaton to Seaton Junction branch line as part of the Beeching "rationalisation". Built in 1868 by the Seaton & Beer Railway Co, it was taken over by the London & South Western Railway in 1885, as goods traffic declined in favour of tourism. The L&SWR was incorporated into the Southern Railway in 1923, and in its heyday the line's motive power was provided by M7 Tank locomotives, with through coaches coupled to Waterloo-bound trains at Seaton Junction. However, as motor vehicles became more affordable, traffic declined and closure came in March 1966.

Hearing of the impending closure, Claude Lane opened negotiations with British Railways. They eventually agreed to the sale of the Seaton to Colyton section, but completion depended upon the granting of a Transfer Order and a Light Railway Order. The ensuing Public Inquiry heard concerns that trams would create unacceptable noise and blemish the natural beauty of the Axe Valley, but the town council contended that the tramway would become a major asset to the area. With assurances given about safety at Colyford level crossing, the inquiry found in the Tramway's favour and final permission was granted in December 1969.

From September 1969, the entire system had to be dismantled, transported over a hundred miles and partially reassembled before the 1970 holiday season ended. This task fell to just two people, Claude Lane and his assistant Allan Gardner, making some 36 return lorry journeys between Eastbourne and Seaton, driving virtually round the clock.

The newly built Riverside Depot began to fill with equipment, and track laying to the wider gauge of 2ft 9 inches began almost immediately, heading north from Riverside. Car 8 became the first tram to run in passenger service on 28th August 1970. With no overhead wire, power was taken from a battery wagon towed by the tram. The line went as far as Bobsworth Bridge, named after the initial fare of one shilling! Operations ceased during September to allow more equipment to be transported from Eastbourne. Winter activity centred on the regauging of tram bogies to 2ft 9 inch gauge, track work and the erection of traction poles to carry overhead wire.

With the line at Colyford, the first full season was eagerly anticipated, but at that moment Claude Lane suffered a heart attack and died on 2nd April 1971. It was decided to see the project through to completion, as he would have wanted, with Allan Gardner taking over as Managing Director. The company took on three new members of staff and as word spread, volunteers offered their time and help.

Battery operation continued for another two years as the line was developed. A diesel loco was purchased to assist works car 02 in hauling equipment. Two passing loops were installed, Axmouth and Swan's Nest, the first named after the adjacent village across the river and the second after the graceful birds looking on from the adjacent field, enabling trams to operate simultaneously. During 1973 overhead wire and fittings were put in place, and the first tram powered from the overhead ran in September.

An extension to a high profile terminus in the town centre was a necessity to the company's financial health. Seaton Railway had been demolished and so the company was obliged to construct a new route deviating from the track bed at the depot. Land was purchased behind the Holiday Camp, allowing the tramway to enter Harbour Road Car Park. Work continued throughout 1974 but marshy ground slowed progress right up until completion in May 1975.

The final extension to Colyton got underway with an overnight session at Colyford level crossing in November 1975, when staff and volunteers replaced standard gauge rail with tram rail. Disaster struck in 1978 when two years of work was lost in flash floods which swept down the embankment north of Colyford. Subsequent flood defence measures held up the opening of the extension until 1980.

The 1980s were a time of further fleet development. Car 12 was rebuilt as an open-topper in 1980. Ex-Metropolitan Tramways car 94 was completed. Acquired in 1962, its conversion involved cutting the body length ways in half and narrowing by 2ft. It entered service in 1984 as enclosed single deck saloon car 14, inaugurated by the late television personality Larry Grayson. The same operation was wrought on ex-Bournemouth Tramways car 106; it entered service during 1992 as car 16. Anticipated demand for wheelchair access gave rise to Manx-style "toast rack" car 17 in 1988 which, with removable seats, carries up to twelve passengers in wheelchairs. The lower deck saloons of cars 6 & 8 were removed in favour of cross bench seating with more legroom.

Car 8 received similar surgery in 1992, and that year also saw works car 02 re-motorised to begin a partnership with hydraulic hoist The Bucket. The company's 25th anniversary at Seaton ushered in a new era of expansion. An Edwardian-style terminus was built and is now a prominent landmark in Seaton. In 1996 the Colyton station complex received a face-lift, including new toilet block, ornate steel and glass canopy and fully blocked paved track recalling the halcyon days of British street tramways. A "hat-trick" of major projects was achieved in 1997/98 when Riverside Depot was extended, incorporating new offices, inspection pits, paint shop and new roof. An attractive façade makes the building visually appealing to those riding the trams.

The official opening of this extension, on 26th September 1998, also coincided with the launch of former Exeter car 19. Built in 1906, it ran in Exeter until closure in 1931, and then lay moribund until 1994, when the Tramway acquired it. Four years of painstaking restoration culminated in inauguration by the Mayor of Exeter, who expressed his delight that part of the city's history had been saved. Car 19 became the third enclosed saloon, permitting the company to run an all-saloon car service whenever necessary.

With the rapid growth in visitor numbers (Seaton Tramway carries over 100,000 visitors a year) 3 new open top trams have been built. Car 9 went into service in 2004 and Car 10 in spring 2005. Car 11 will follow by the autumn of 2005. These 3 trams are of a hybrid design based on the old Plymouth and Blackburn trams.

If he were still alive, Claude Lane would have enjoyed the sight of trams reappearing in Manchester, Sheffield, Croydon and Birmingham, although he would probably wish to stress the advantages of the simplicity and tradition that the Seaton Tramway has to offer and it continues to carry the torch for the spirit of a bygone age, of which Claude Lane was himself a product. Well into the 21st Century, his legacy endures and continues to capture and inspire the imagination of thousands of delighted visitors.